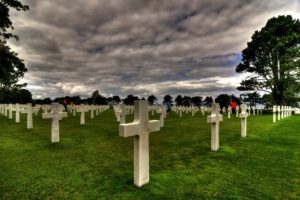 Those few words invoke images of war unlike any we have seen in decades. GIs landing in rough seas and braving German fire as they waded through the water from their landing craft along a 60-mile stretch of beach. Omaha, Juno, Sword, Gold and Utah. Those beaches will forever be remembered in history as places where brave men fought and died.

As I think about those men, and their families waiting back home for word of whether their loved ones lived or died, I can’t help also thinking about the current state of affairs in today’s world. Someone on social media asked what happened to the Britain of that time. A Great Britain that stood defiantly against Hitler as the Nazis bombed it night after night. A Great Britain that spat in the eye of those who wanted nothing more than to bring it to its knees.

I’m not sure I have the answer. Oh, I see various factors that feed into it. The belief that war should be civilized, that we shouldn’t strike if there is the chance of collateral damage. This idea that the West deserves what is happening because of events in the past. The idea that if we simply keep turning our cheek the enemy will stop attacking. There’s more but you get the idea.

But that’s not the reason for this morning’s post. Today, I honor those men who risked so much that day. I remember the civilians who risked their homes and their lives to assist them. I urge everyone to do the same and to consider the truth of the adage that those who do not learn history are doomed to repeat it.

I’m terribly afraid we are seeing that in action right now thanks to our education system and the need not to offend anyone’s sensibilities, no matter how unreasonable those sensibilities might be.