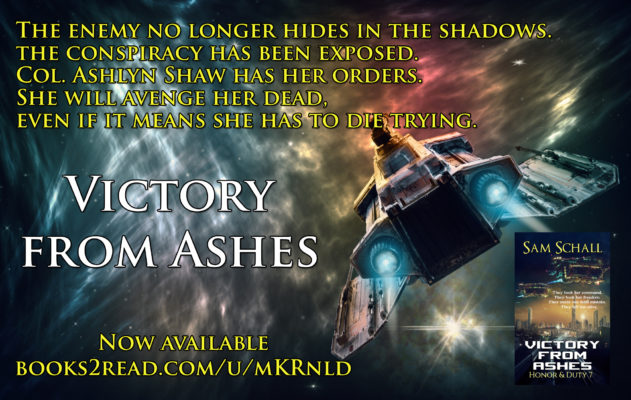 It’s here! It’s here! I’m equal parts excited and terrified. But that’s par for the course on release day. It doesn’t matter what the book might be. This time, it’s Victory from Ashes (Honor & Duty 7). You can download the ebook from Amazon today. It will be available at the other major outlets next week. The print version should be available around then as well.

War is hell. No battle plan survives the opening salvo. When the enemy is set on the total destruction of your homeworld, how far will you go to protect it and those you love?

This war has already cost Col. Ashlyn Shaw too much. She has lost friends and family to an enemy that doesn’t know the meaning of honor. Marines under her command have died doing their duty. Her enemies at home conspired and brought her up on charges, sending her and members of her command to the Tarsus military penal colony. But they didn’t win then and she won’t let them win now. She is a Marine, a Devil Dog, and they can’t take that away from her.

Ashlyn is determined to do all she can to protect her homeworld and end the war. She will lead her Marines against the enemy, knowing that if they fail, Fuercon will fall. But will it be enough and will those who have conspired behind the scenes to destroy her and all she stands for finally be brought to justice?

Duty and honor. Corps and family. That is what matters. It is all that matters.

I’d really appreciate it if you helped spread the word. Thanks!