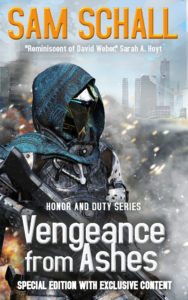 I did it. I knew when I wrote Friday’s post, I was tempting my luck. I should know better than to throw down the metaphorical challenge gauntlet where my muse is concerned. But I did it and now Myrtle the Evil Muse is going to make me pay for it.

Long story short, when I started considering releasing the expanded edition of Vengeance from Ashes and the other books in the Honor and Duty series, I didn’t know what to do about the short stories that act as prequels to the series. Friday, after blogging, I started thinking about whether or not I should release them into the wild. That started me thinking about whether or not a prequel novel should be written. There have been requests for one, specifically one that deals with the events that led to Ashlyn being court-martialed.

That’s where Myrtle the Evil Muse stepped in. The individual short stories will be taken off of the KU program and released into the wild. But, they will also become the basis for a prequel novel. I’m still working on the actual plot and mechanics of how to do it. I do have the title — Honor Bound. Of course, that might change as things progress, but that’s what I’m working with right now.

So, that gets added to the list of books to be written.

As for the rest of it, I’m working on updating all my e-books (mainly formatting updates as well as updating key words) as I update print files and get them ready for release. Some covers will be changing as well. Then I need to talk with someone about doing audio books for at least the science fiction novels.

In other words, I’m practicing what I preach and looking at my writing as a business. More on that as it progresses. For now, I have a couple of contract obligations to deal with this morning and then it’s back to writing.

In the meantime, we are counting down to the release of the expanded edition of Vengeance from Ashes. Eight days to go!