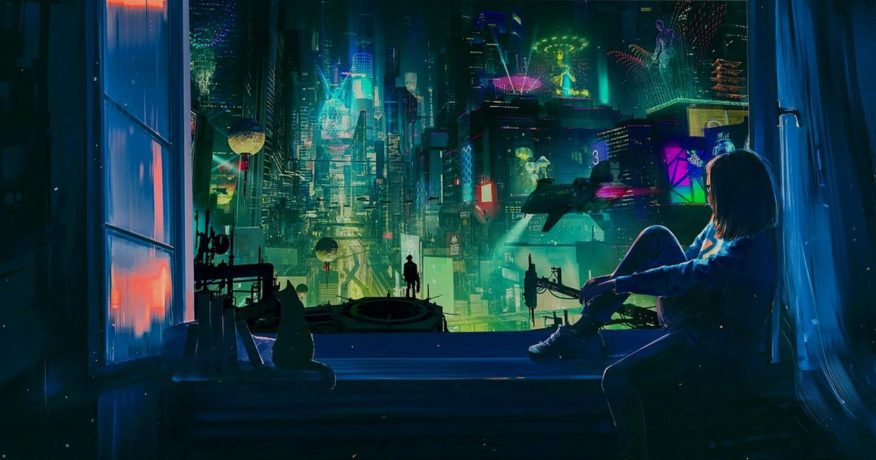 This isn’t going to be a regular feature. I’m doing it today because 1) Witchfire Burning was selected as a featured first in series by Books2Read, 2) I have several books out wide that haven’t been and 3) I have some pre-orders out there I wanted to remind you about. Then there’s some news on the writing front that will follow. So let’s get started.

The other day, I received an email from Books2Read saying that Witchfire Burning is included in their latest Indie Fireworks promotion. Check it out. It is listed under the first in series section. But there are a number of other great book books included as well.

Next up, Sword of Arelion and Dagger of Elanna (Sword of the Gods series) are now available wide. The titles haven’t hit all the stores yet, but will shortly. Here are the blurbs. 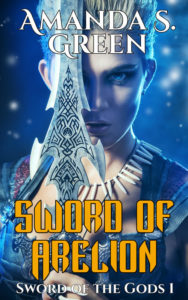 War is coming. The peace and security of the Ardean Imperium is threatened from within and without. The members of the Order of Arelion are sworn to protect the Imperium and enforce the Codes. But the enemy operates in the shadows, corrupting where it can and killing when that fails.Fallon Mevarel, knight of the Order of Arelion, carried information vital to prevent civil war from breaking out. Cait was nothing, or so she had been told. She was property, to be used and abused until her owner tired of her. What neither Cait nor Fallon knew was that the gods had plans for her, plans that required Fallon to delay his mission.Plans within plans, plots put in motion long ago, all converge on Cait. She may be destined for greatness, but only if she can stay alive long enough. 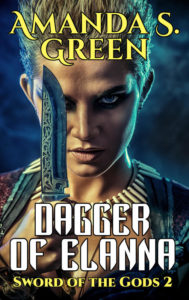 Plots form, betrayals are planned and war nears. Cait Hawkener has come to accept she might never remember her life before that terrible morning almost two years ago when she woke in the slavers’ camp. That life is now behind her, thanks to Fallon Mevarel and the Order of Arelion. Now a member of the Order, Cait has pledged her life to making sure no one else falls victim as she did.

But danger once more grows, not only for Cait but to those she calls friends. Evil no longer hides in the shadows and conspirators grow bold as they move against the Order and those who look to it for protection. When Cait accepts the call to go to the aid of one of the Order’s allies, she does not know she is walking into the middle of conspiracy and betrayal, the roots of which might help answer some of the questions about her own past–if it doesn’t kill her first.

The last book to go live over the weekend is Skeletons in the Closet. This novella is set in the Eerie Side of the Tracks universe and has been expanded some from when it was first released. If you bought it on Amazon, simply update your file. (You’ll know you have the newest file when you have a welcome message at the beginning of the book and a sneak peek of Witchfire Burning at the back. There is approximately 2-3k new text to the story–not counting the new end and back material.) Here’s the blurb: 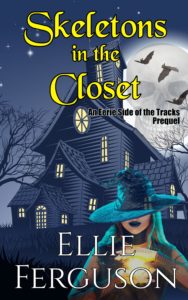 Lexie Smithson’s family had never been what most folks would call “normal”. They had more than their fair share of oddballs and loners and even crazy cat ladies. Most families in Mossy Creek did, especially if they lived on the “wrong side of the tracks”. But things took a decidedly sharp turn to the left of weird the day Lexie’s sister came home from school, complaining about how Old Serena Duchamp had given her the evil eye. When her mother decided it would be a good thing to confront the town’s resident witch, Lexie knew life would never be the same. How could it when their loved ones began returning to the old homestead the day after their funerals. Lexie knew she should be happy none of her neighbors reported mutilated cattle or corpses with missing brains. But that can be hard to do when your loved ones have passed but not passed on.

Skeletons in the Closet is a novella set in the Eerie Side of the Tracks universe. It is the first of a series featuring Lexie, her family – both living and dead, not to mention furry – and their friends.

I’m thrilled to have these books now available (or shortly to be available) on all major retail platforms. They, as well as the rest of my books that have gone wide, are also available–or will soon be–on Scribbd, Overdrive and similar platforms as well. The links above are universal links and will show what platforms the titles are currently live on. If you don’t see your favorite store listed, let me know and I will do my best to get the titles released there.

Oh, and what do you think about the new covers? I love them, especially the ones for Sword and Dagger.

On the pre-order front, Victory from Ashes (Honor & Duty), Danger Foretold (Eerie Side of the Tracks), and Fire Striker (Tearing the Veil) are now available for order.

On the writing front, the final edits before Victory from Ashes goes to the beta readers are being done. I love this book and hope you guys will as well. So be on the look out for calls for a few of you who would like an eARC of the book. Those should go out in 3 weeks or so, if not sooner.

BTW, don’t forget the Indie Fireworks promotion. Not only is my book there but so are a number of great books by some awesome authors. Check it out.

And now it’s time to find more coffee and to get to work. The house won’t clean itself. Until later!

Featured Image by ParallelVision from Pixabay