There is no other word — at least not printable in mixed company — that describes how I feel right now. It seems like everywhere I turn, I see a story about how someone wants to keep someone else from doing or saying or acting a certain way because it makes that first person “uncomfortable”. All too often, they throw around the term Post Traumatic Stress Disorder to give credence and weight to their argument. They claim seeing a certain word or person or item or whatever, will “trigger” their issues and that just isn’t fair.

Give me a break.

Look, I am the first one to admit PTSD is a real issue for some people. But I would bet dollars to donuts that most of those claiming it in an attempt to keep someone from speaking at a con because he might tell fat jokes or someone else wanting to shut down open carry because it might frighten or trigger someone else’s PTSD have no clue what those who really suffer from the disease really go through — or what they went through to be suffering from it now. 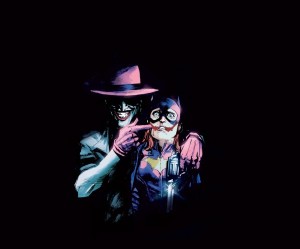 The latest example of this “right think” attack on ideas centers around a Batgirl Joker cover for DC Comics. The cover gave tribute to a Batgirl/Barbara Gordon story line that is one of the most well-known story lines for the character. It referenced back to “The Killing Joke.” It is canon and yet the hue and cry — and threats — that went up when the cover was leaked has now caused the artist and DC to withdraw it.

The artist, Rafael Abuquerque, created the cover to pay homage to a canon plot, one that was important to the Batgirl/Barbara Gordon development as a character. But, you see, the problem is “The Killing Joke” came out at a time when we recognized that there are dark and hurtful things in the world and you have to learn to overcome them. Will they hurt you long after the event? Sure. Will you have nightmares? Absolutely. But you strive to overcome so you aren’t a perpetual victim.

DC has let things change since then, doing as so many other companies have by giving in to the cries of “patriarchy” and “trigger warning” and “ooh, that might hurt me”. So Batgirl/Barbara Gordon’s dark past has been lightened and just the reminder of it is enough to send the trigger warning set into fits.

Abuquerque had this to say after the hue and cry went up, “My intention was never to hurt or upset anyone through my art, for that reason, I have recommended to DC that the variant cover be pulled.”

So, from now on, this artist will think twice — or more — before accepting a commission or doing a piece of art for fear it might hurt or upset someone. Pardon me, but when did we become such a bunch of whiners who can’t see a comic book cover for what it is? A great piece of art paying homage to a story arc and to the way a character has overcome the obstacles set for her?

Abuquerque isn’t along in this and the fact that he and DC caved to the few — sorry, but when you look at how many people, male and female, buy DC Comics, those who objected to this one cover are only a “few” — merely encourages the belief that if I don’t like something, if it makes me feel icky, if it sets off my “triggers”, all I have to do is scream long and loud. My friends and their friends might join in and, if we are shrill enough, the other side will cave.

What sort of outrage would we hear if the cover had been reversed? What if it had shown Batgirl terrorizing or beating The Joker? Then what if DC had decided to pull the cover because it made some of their male customers uncomfortable? I guarantee those complaining about Abuquerque’s cover would be up in arms. After all, in many of their minds, it is all right to terrorize or demonize or subjugate men. It’s time women did it because patriarchy and such. Right?

Think about it. You don’t see those same voices that cry out in agony to see a book cover they believe belittles women saying we should pull the covers that have nude and semi-nude men on them. You don’t see them saying video games like Tomb Raider should be redone so that there is an option of playing as Loren Croft instead of Laura Croft. You never will hear them say that because they believe it is just fine.

Sorry, but if you want to impose “equality”, you have to apply it fairly across the board. There can be no exceptions.

Or you could just pull up your big girl pants and realize that bad things do happen to people and we either find ways to cope or get past it or we continue to be victims. You have to realize that you aren’t always going to like what happens to you — it’s life, not a movie or book that always has that happily ever after. You have to realize that you are not more important than everyone else and your wishes and desires don’t take precedence over theirs just because you want them to.

Most of all, you have to realize that being whiny and stomping your foot to get your way is the behavior of a two year old. Most of them grow out of it, with a little guidance from their parents. Maybe it is time for the adults to remember that and do the same. Grow up and get a life.

Oh, and before you whinge and whine about a comic book cover, do a little research. If it is true to canon then keep your frigging mouth shut unless said cover is breaking the law somehow.