Over at Black Gate, Harry Connelly talks about writing to your audience, attack novels and an urban fantasy he has been writing for awhile. Normally, I’d skim the post and move on. Every author I know, yours truly included, has their own thoughts about whether or not you should write to your audience. But Connelly brought up a couple of good points and ended with a question that had me thinking, not only about the writing process but about urban fantasy as a whole.

His question? “Do book buyers (and not just older ones) want to read a pacifist urban fantasy about a socialite who’s part Auntie Mame, part Gandalf? I’m about to find out.” 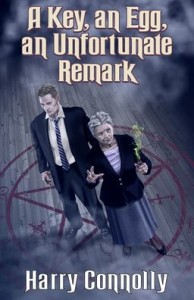 His urban fantasy, A Key, an Egg, an Unfortunate Remark

has a 65 year old protagonist. As Connelly notes in his post, it isn’t unusual to find older main characters in mysteries. There is a whole sub-set of the genre that features them. Urban fantasy — in fact, most science fiction and fantasy — simply doesn’t have that sort of a main character. UF has become known for its “kick-ass heroines”. So, is it because the readers don’t want that sort of character or is it because there simply hasn’t been a good one written yet?

That is sort of like asking which came first, the chicken or the egg. Until we have some good ones featuring older main characters, we aren’t really going to know whether or not the market is open to them. My personal thought is that a sub-set of the genre might evolve but that main stream UF will always feature younger characters simply because of what we have come to expect. As someone who is north of 40, I know I tend to snicker — okay, guffaw — when I read scenes in any genre where a spry, or not so spry, woman of a certain age whips up the nearest umbrella or fireplace poker and starts fencing with it without having a hip catch or a knee tweak or an ankle twist.

But then I re-read Connelly’s description of the book and came to a screeching halt. I could buy an older protagonist, especially if said protagonist is a magic caster and not someone who is out there actively sword fighting or whatever. However, a pacifist urban fantasy novel?

As a reader looking for a book in the genre, that one word would turn me off. I don’t look for a pacifist as the main character in my urban fantasy. “Kick-ass”, remember. That is the key. You have a protagonist, male or female, who is fighting for something. That is the core of the genre. But maybe that one word in a one sentence description was misleading me. So off I went to find out more about the book.

After checking out the Amazon description, it would seem that Connelly is hurting himself with his one sentence description in the blog and elsewhere. The full description doesn’t read like his main character is a peacenik condemning all violence and refusing to lift a finger to protect herself or those she cares for. Based on the description, I would at least look at the sample. However, if I hadn’t been writing this post and only reading his comments at Black Gate, I wouldn’t look any further.

After years of waging a secret war against the supernatural, Marley Jacobs put away her wooden stakes and silver bullets, then turned her back on violence. She declared Seattle, her city, a safe zone for everyone, living and undead. There would be no more preternatural murder under her watch.

But waging peace can make as many enemies as waging war, and when Marley’s nephew turns up dead in circumstances suspiciously like a vampire feeding, she must look into it. Is there a new arrival in town? Is someone trying to destroy her fragile truce? Or was her nephew murdered because he was, quite frankly, a complete tool?

As Marley investigates her nephew’s death, she discovers he had been secretly dabbling in the supernatural himself. What, exactly, had he been up to, and who had he been doing it with? More importantly, does it threaten the peace she has worked so hard to create? (Spoiler: yeah, it absolutely does.)

I don’t know about you, but that is much more interesting than “”Do book buyers (and not just older ones) want to read a pacifist urban fantasy about a socialite who’s part Auntie Mame, part Gandalf? I’m about to find out.” Yes, I know. This is not a proper description of the book but, when it is your first intro to the title, it does give you pause. Or it did me.

I guess what I’m saying is instead of asking whether a reader wants to read about a certain type of character — at least not until you have some sort of an answer and Connelly’s 20 or so reviews ought to answer in part his question — phrase your comments about the project in ways that will entice readers to try something different instead of using words that are the exact opposite of what a genre stands for.

What do you think?