A year ago, author Brenna Aubrey made the decision to turn down a traditional publishing contract for three books in order to go indie. At the time, she blogged about her decision, her reasoning behind it and, if I remember correctly, her concerns. I remember reading her blog entry back then and wondering how she’d fared after taking a step a lot of us might find difficult. Now, one year later, Aubrey is back with an update about what’s happened in the interim. There is a lot of information in her post and, because of that, I’m going to take several posts to discuss it.

First off, let me start by applauding Aubrey not only on her decision but on following up and letting her readers know what’s been going on. Most of all, I applaud the fact that she has given us a look at the offer she’d been given and that is what I’m going to discuss today. The offer may differ in the monetary amount offered from other contracts but the basic gist of it is the same and it is something every author who thinks about going traditional needs to be aware of.

You can find Aubrey’s latest post on her decision here.

As noted above, the offer from the traditional publisher was for three books. From Aubrey’s post, here’s what they offered her: 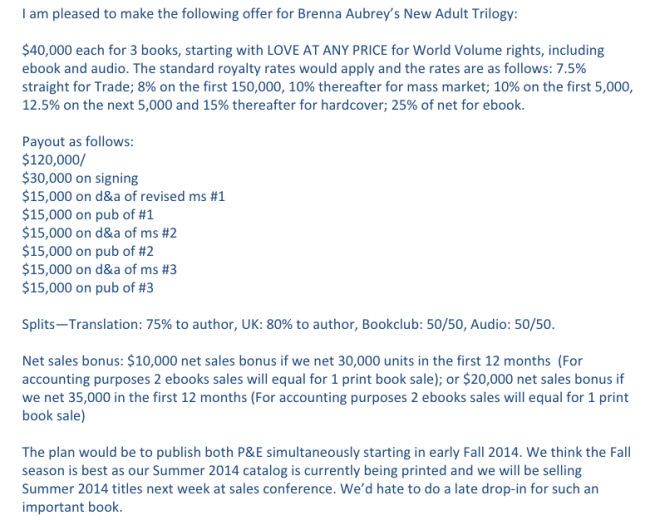 At first glance, this doesn’t look too bad. Of course, since this is a screen capture of an email (iirc), we don’t have all the contract language. So we have to take that into account as we go over all this.

The first thing that struck me concerns the royalty amounts. If you look at them, you only see “net” applied to e-book sales. However, when you scroll down, you see that the bonus Aubrey could receive if she agreed to the terms was based on net sales as well. So, my guess is that if we’d seen the contract language, all royalties are based on net and not gross. What that means is that the publisher gets to recover its “costs” before reporting out royalties.

Then, since the royalties are bumped based on number of units sold, that means the author will once more be at the mercy of Bookscan to determine if she reached the required sales threshold or not. It also means that she would have sold more books than required to reach that threshold since Bookscan doesn’t record or report every sale but uses some sort of arcane handwavium to extrapolate sales based on what is done in their member bookstores, etc.

The second thing I noted is that there is no incentive attached to e-book sales. That is the only medium where no bonus is offered. Add to that the fact that, for bonus purposes, the author had to sell two e-books for it to count as one “unit”. That is the only medium where that is the requirement. Every other “edition” is a one for one accounting. If that isn’t an indication of how publishers, or at least this particular publisher, still view e-books as an anathema to publishing, I’m not sure what is.

The money offered upfront is attractive. I know I would have had a hard time turning it down. But, if I had the following Aubrey does, I very well might have, especially looking at the numbers being offered and weighing them against what I could, hopefully, anticipate getting if I were to release the books on my own.

I applaud Aubrey for her decision and for being so public with the results of that decision. I’ll talk more later about the rest of her post. In the meantime, if more authors took the step Aubrey did, perhaps traditional publishers would start realizing that there is a viable alternative to authors out there, one where we can make much more money, and certainly make it more quickly, than their antiquated royalty system.